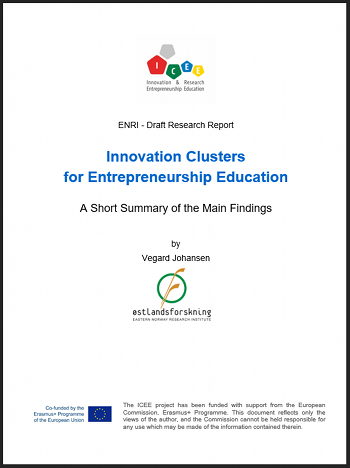 The Eastern Norway Research Institute (ENRI) has recently published a short summary of the main findings from the quantitative study in the ICEE project. All the findings presented in this document are confirmed, but tables and analyses are not yet finalised for publication. The final report will be released in January 2018.

Considering the positive research indications from previous studies and the widespread use of mini-companies in the European schools, the ICEE project has used this method and the JA Company Programme (CP) as its test-bed.

The ICEE project includes both quantitative and qualitative research methods; 25 schools in five countries (Belgium, Estonia, Finland, Italy, and Latvia) took part in the field trials; 12,000 people have responded to the surveys, 150 people have been interviewed individually or in groups, and an unknown number of students have been observed while working with their peers in the mini-companies.

To document the significance of CP, three groups of respondents are compared:

It is possible that CP-participants are different from non-participants in terms of demographic variables which may bring theoretical or empirical reasons to assume that this difference would affect entrepreneurial skills and attitudes. Thus, the analyses also check the impact of independent variables such as gender, immigrant and family background, previous entrepreneurial experiences, etc.

The ICEE research design has advantages compared to previous impact studies. To reduce self-selection bias, the ICEE research distinguishes between students who take part in the CP as a mandatory activity and those who take part in it as an optional activity. It also investigates whether the impact of CP varies according to the position in the mini-company and the data allows an investigation of whether the impact varies according to the time students have spent in the CP.

Different types of analyses are carried out for the results presented in this document. These include linear regression, logistic regression, ANCOVA, multilevel modelling, principal component analyses, tests of internal consistency, various tests of correlations and effect size. The differences between the groups are accepted and presented as likely, when results are significant at 0.01-level (99 % probability for correlation).

In general the data collected through the ICEE research enables so many different types of analyses that the ICEE research can make an important contribution on both understanding the impact of mini-companies and identifying the drivers and obstacles to entrepreneurship education (EE).

ICEE project has been funded with support from the European Commission, Erasmus+ Programme. This website reflects only the views of the author, and the Commission cannot be held responsible for any use which may be made of the information contained therein.